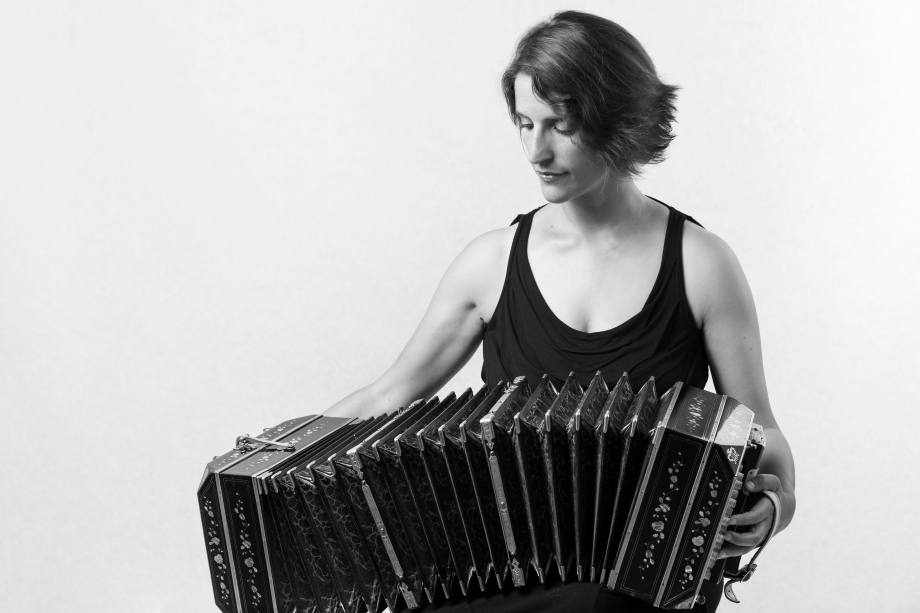 Born in Ghent, Belgium in 1978. She started studying the piano when eight years old, at the Music School of Gentbrugge, from which she graduated in 1996.

When 15 years old, she started studying bandoneón at Codarts, the Rotterdam Conservatory, under the guidance of Leo Vervelde. She graduated in 2001. In the same year she won a scholarship granted by the Netherlands, which permitted her to live and study for one year in Buenos Aires, being a student at the Orquesta Escuela directed by Emilio Balcarce. She has been living and working in Buenos Aires ever since.
Since 2012 she is part of the cast of Boulevard Tango, a contemporary dance show starring prima ballerina Cecilia Figaredo.

She was part of the cast of different tango venues: Esquina Homero Manzi, Piazzolla Tango and Café de los Angelitos amongst others. From 2006 onwards she has been playing in the show of Madero Tango.

From 2008 until 2009 the played in the Sonia Possetti Quintet and in the Orquesta Sans Souci.

She was part of the Orquesta Juan de Diós Filiberto and recorded with said orchestra.

In December 2006 she participated in the show “Hernán Buenosayres”, starring ballet dancer Hernán Piquín.
From 1999 until 2001 she was part of the Sexteto Canyengue, directed by
Carel Kraayenhof. With said sextet she recorded two CDs: “Tango Máxima” and “Tango Royal”.

With Sexteto Canyengue and the Compañía Tangueros she travelled to the United States, Italy, Turkey and Germany amongst others.

From 1995 to 1997 she played in the Orquesta Típica of Alfredo Marcucci in Brussels.

She is the author of the bandoneón method “The bandoneón in tango”, edited by Tango sin Fin editions (April 2018).

She was a member of the faculty of “Tango para músicos” in Argentina and “Tango for Musicians” in the United States from 2015 until 2018.

Born in 1969 in Chascomús, Buenos Aires. Lives and works in Argentina. Pianist, arranger and teacher. He began studying the piano at the Music School in Chascomús, his hometown. He graduated from Escuela de Música Popular de Avellaneda, where he studied piano under the guidance of teachers Orlando Trípodi and Lilián Saba.

He has been the pianist of the Orquesta del Tango de la Ciudad of Buenos Aires since 2004, directed by maestros Raúl Garello, Carlos García, Néstor Marconi and Juan Carlos Cuacci.

He performed with the trio formed by bandoneon player Julio Pane many times, and as a member of Quinteto de la Fundación Astor Piazzolla and the Sexteto de Julián Plaza. He was a member of the Quinteto Rodolfo Mederos for 10 years, and he toured abroad extensively (1992-2002). He was also part of ensembles at various tango venues, such as: “El Viejo Almacén”, “Sabor a Tango”, “Caño 14”, “Casablanca” and “La Ventana”.

He participated in the tango show of Julio Bocca, the renowned ballet dancer, and travelled around the world for many years with said company.

He has been a part of the cast of “Madero Tango” since 2006, and is now the musical director. He has accompanied many singers, such as: Raúl Lavié, Jorge Sobral, Guillermo Fernández, Virginia Luque, Alba Solís, Amelita Baltar, Julia Zenko, Alicia Vignola, María Graña, and others.

For two years he played with the Quinteto de Adriana Varela, with whom he performed in London and several venues in Argentina.

In 2011, he performed in the world-renowned show Tango Argentino. That same year he also played in the quintet formed by bandoneon player Juan José Mosalini.

In 2012 he started playing in the show “Boulevard Tango” directed by dancer Cecilia Figaredo.

In 1998, he toured Japan with the Orquesta de Mauricio Marcelli. Upon his return, he promptly joined the quintet of said violinist.

From 1998 onwards he has been a member of the Quinteto de Pablo Mainetti. With this quintet he has toured New York, Portugal and Paris. He recorded three CDs.

He is the author of the tango method “The Piano in Tango”, published by the Fondo Nacional de las Artes in 2015.

He was a member of the faculty of “Tango para músicos” in Argentina and “Tango for Musicians” in the United States from 2014 until 2018.

He has been teaching Piano Tango at the Escuela de Música Popular de Avellaneda since 1994, and teaches at the UNSAM (Universidad Nacional de San Martín).